The Joint Admission And Matriculation Board (JAMB), which is the recognised Nigerian entrance examination board for higher institutions, has revealed its financial outflow for the month of July 2020.

The exam body in its weekly publication from the office of the registrar made available on its official Twitter account on Monday, August 3, revealed that is spent N89,292,033.31 from July 25 to July 31, 2020.

JAMB in the publication revealed that it spends one hundred thousand naira (N100,000) on internet data subscription while about a million naira was spent to pay gate-men salaries.

Investigation had it that the financial inflow of JAMB for the above mentioned period was fifteen million eight hundred fifty-seven thousand, seven hundred sixty-two naira (N15,857,762.00) and financial outflow for the same number of days was; eighty-nine million two hundred ninety-two thousand thirty-three and thirty-one hundredths (N89,292,033.31).

See below the breakdown of both financial inflow and outflow  of JAMB; 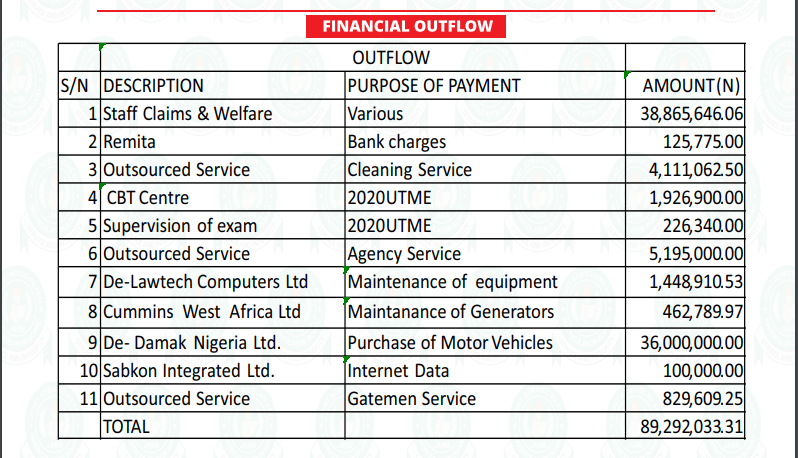 Many Lives Touched As Chukwuemeka Onyenucheya Foundation Is Officially Launched

Nigeria On The Verge Of Reversing US Ban

We Are Working With The Chinese To Domesticate The Railway...